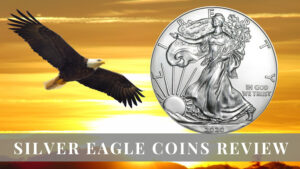 Welcome to Numismatic Traders! We are looking at the most popular silver bullion coin in the world in our: Silver Eagle Coins – Review.

The Title II of Public Law 99-61, which was known as the Liberty Coin Act paved the way for the first one ounce .999 fine silver coin to be backed by the United States Government.

The USA government aimed at reducing their national silver stockpiles with section 203 under the heading “PURCHASE OF SILVER”.

“ The Secretary shall obtain the silver for the coins authorized under section 5112(e) of this title by purchase from stockpiles established under the Strategic and Critical Materials Stock Piling Act..”

A person who is considering buying Silver Eagle Coins has options to choose among 3 different types of Silver Eagles. The 3 types have relatively the same design (with a few minor deviations).

The coins are mass-produced and intended for investors in the silver metal market. The coins do not bear mint marks and are not sold directly by the US Mint to the general public. The coins are rather distributed through a network of wholesalers and dealers who are authorized to sell to the public.

Silver Eagle Bullion Coins produced by which mint in which year:

The term “proof” points to the way that the coins are produced resulting in the distinguished visible features of the coin. Proof production raises the precision of the coin’s design as the image and inscription on the face to appear sharper with a frosted foreground and mirror-like background.

The proof blanks are hand polished and cleaned before being fed into the presses fitted with special manufactured polished, high quality dies. The blanks are struck at least twice.

Thereafter the coins are carefully packaged in protective capsules to display and conserve the beauty of the coin and to keep them intact. Proof coins are issued with an official Certificate of Authenticity.

Silver Eagle Proof coins are specifically produced for the collectors’ market of the Silver Eagle coins. These coins trade at much higher premiums of even up to three times more than normal bullion coins.

Burnished coins are struck on coin blanks that have been specially prepared by the burnishing method of polishing and hardening the silver blanks’ surface.

During the burnishing process, the silver is pressed and polished with one or more rotating steel rollers or balls. Instead of chipping away the surface, this technique uses the tendency of the metal to deform under stress. The end result is silver blanks with a smooth silver texture and shiny reflective finish with superior strength and load-bearing qualities.

The silver blanks are hand-loaded into the coining press and struck with special manufactured high-quality dies. This process produces coins with a matte-like finish and a brilliant appearance.

The coins are also carefully packaged in special casings and issued with an official Certificate of Authenticity.

Burnished Silver Eagles are made for the Numismatic market segment. These coins are issued at a premium price well above the spot price of silver.

The Silver Eagle’s success in its relatively short lifespan cannot only be attributed to its pure silver content and high-quality production process.

Arguably the biggest contributor to the coin’s success is the beautiful, artistic, portray of Lady Liberty walking to the rising sun featured on the obverse of the coin. It is a timeless, iconic design packed with symbolism that can resonate with a worldwide audience.

The obverse design was first depicted on the Walking Liberty Half Dollar between 1916 and 1947. Adolph A Weinman was responsible for this design upon President Theodore Roosevelt’s instruction.

The walking Lady Liberty occupies the space of the obverse. She is dressed in long robes with the American flag draped over her right shoulder. In her left arms, she carries branches of laurel and olive as a symbol of her approach in peace. Her right arm is stretched open as she steps forward towards the future. The rising sun over the mountains which she is approaching is clearly visible with its extended rays. The detail of this design is honestly mindblowing.

The word LIBERTY encapsulate the top half curve of the coin.

Behind her right leg the words: IN GOD WE TRUST

The date issued is situated at the bottom of the coin below Lady Liberty’s feet.

The name of the coin originates from the reverse design by United States Mint Sculptor/Engraver John Mercanti.

The reverse depicts the eagle shield. In the eagle’s right talon is an olive branch and in his left talon six arrows. Above the eagle are thirteen five-pointed stars representing the original thirteen colonies that formed the United States of America. In the eagle’s beak is a ribbon draped to the right side of the eagle: E PLURIBUS and on the left side UNUM.

Below the eagle’s left talon are the initials JM inscribed for the engraver John Mercanti.

The phrase UNITED STATES OF AMERICA is inscribed on the top curve of the coin.

Following the bottom curve of the coin the words: 1OZ. FINE SILVER~ONE DOLLAR

The Silver Eagle Bullion coins do not contain a mintmark as stated before. The mintmark on the proof and burnished Silver Eagle is just below the eagle’s right claw.

Many people don’t realize it, but different coins from different Mints come with their own unique pros and cons.

The Pros of the Silver Eagle Coins

The Silver Eagle Bullion coins are issued at prices that are based on the spot price of silver plus a small premium to cover minting and distribution costs. Silver is still trading at relatively low prices which makes them an affordable option to start investing in silver or to start a coin collection.

The Silver Eagle’s beauty and design is a worldwide trademark that remained constant from its inception in 1986.

Over 130 million Silver Eagles have been sold since 1986. This bullion coin’s sales surpassed all expectations. In certain years the US Mint could not produce enough for the demand. This means that there is always an active market for Silver Eagles, making them very liquid assets. This fact gives any investor peace of mind that your coins will quickly turn into cash if needed.

The 1 ounce .999 pure fine silver coin meets the requirements of silver investors. The coins are manufactured by the US Mint which is known for its high-quality production standards.

The Silver Eagle is issued as a $1 legal tender coin backed by the United States government. The coin trades as much higher prices at premiums above the spot price of silver.

Graded as an allowable Independent Retirement Account (IRA) instrument, the coin is granted the status symbol of an approved asset for retirement investment purposes.

The Silver Eagle was the world’s first government-sponsored silver bullion 1 oz coin. The coin’s history is based on innovation and trust.

Not only is the coin produced for investment purposes but with the proof and burnished designs,  collectors and numismatic demands are also met which creates an added bonus of variety.

The Cons of the Silver Eagle Coins

1. The fluctuating nature of silver

The Silver Eagle coins are priced at prices based on the spot rate of silver. The spot price of silver fluctuates rapidly which can be difficult to grasp for newcomers to the silver market. The fluctuations in the silver price are less predictable than other commodities.

There is a possibility that the value of coins can decline with changes in the silver market.

As the value of silver increases, so do the actions of rogue counterfeiters also increase. Coins are by nature more difficult to counterfeit than bars due to their design features which increases the cost of counterfeiting.

There is the risk of physical loss and damage of silver through theft and other natural disasters. The buyer of silver must always be aware and take great measures against theft because silver is very valuable.

Silver in its pure form of .999 is very soft and great care needs to be taken against the damage of coins. A damaged coin loses its value instantly. This is relevant when you pay a high premium above the silver price especially when buying proof or burnished coins.

It is a safer option for Silver investors to store their silver in third-party vaults than to store silver at home.

Silver takes up more space per dollar than gold and it can become quite heavy when transporting larger quantities of silver coins.

A buyer of Siver Eagle coins must also consider how the coins will be stored after purchasing them.

5. Premium over the silver spot price

You must always be aware of how much premium you pay above the silver spot price for your Silver Eagle coins. Due to the production and handling costs, the premium for Silver Eagles can become high and expensive. Transportation and other costs also need to be considered when calculating the premium over the spot price of silver.

From this Silver Eagle Coins Review, it is certain that the Silver Eagle should be the Nr.1 Recommended coin due to its popularity which provides liquidity and trust throughout its history of over 30 years.

It is not only an attractive coin for investors but with other appearances and finishes Silver Eagle coins, have found their way into the hearts and minds of Numismatics.

Silver Eagle coins are affordable for start-up investors and collectors as well.

In the year 2021, we will be blessed with a new Silver Eagle coin design. It will also be the first year that two designs will be issued in one year. Considering the expected fireworks that will be coming from silver as a hedge against inflation and a store of value we predict a great 2021 year and beyond for Silver Eagle coins.