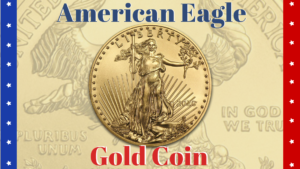 What more can be said about the most popular U.S. Mint gold coin? The American Gold Eagle coin can be classified as an alloyed gold coin because it contains 91.7% gold with the remainder alloy of 5.33% copper and 3% silver. The American Gold Eagle can be classified with its ancestor the Krugerrand which has a similar gold content of 91.7%. The Gold Eagle coin weighs more than the pure gold coins such as the Canadian Maple Leaf, Britannia and American Buffalo because you are still being blessed with 1 oz fine gold. The copper and silver added to the one ounce increase the weight of the coin.

The official gold bullion of the United States

In 1985 it became illegal for US citizens to buy Krugerrands. Krugerrands were the leading gold bullion coin and the U.S. its biggest market. It became difficult for Americans to invest in physical gold. The Gold Bullion Act of 1985 paved the way for the American Gold Eagle Coin.  The Gold Eagle was introduced in 1986. Under the Eagle Bullion Program, a method was introduced for Americans to conveniently and cost-effectively purchase gold.

By enabling individuals to buy Gold Eagles the American gold industry was supported as well because the Gold Eagle coin is only allowed to include gold that is sourced from the United States. The other metals included may also not be sourced from foreign sources either.

The weight, content and purity of the American Gold Eagle coin are guaranteed by the U.S. government. All the obstacles have been removed for U.S. citizens to buy their country’s own coin. The sales of the Gold Eagles were the highest in 1986 until 1998, even though the Gold Eagle was only introduced in October 1986. The Gold Eagles became an overall success and the best selling gold coin in the USA making up 80% of the U.S. gold bullion market.

The design of the American Gold Eagle which is esthetic and artistic has ensured that the coin became one of the most popular and iconic coins in the world.

The American Gold Eagle has an upset rim which makes it easier to stack the coin and reduce wear when handling. The edge is reeded.

The predominant feature of the Gold Eagle is the beautiful depiction of the full-length forward-facing Lady Liberty. Although the coin is named the Eagle, what draws the most attention is the obverse with the gorgeous image of Lady Liberty.

The Lady Liberty evolved over time from flowing hair of 1794 to today’s silver and gold American Eagles bearing the Lady in full-length. 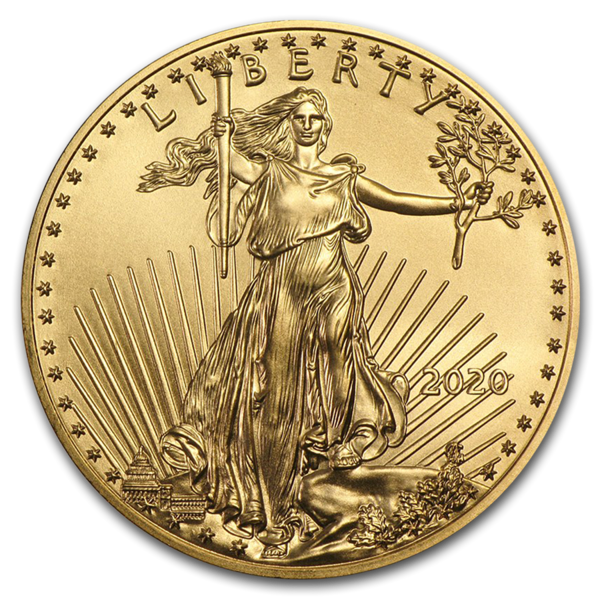 Lady Liberty dominates the obverse side of the coin. She is striding confidently forward walking on a mountain top. She symbolizes her role as leading the nation into a brighter future. She is dressed in robes and her loose long hair is flowing in the wind. Behind her are the rays of the rising sun. The U.S. Capitol is visible at the bottom left.

In her right hand, she holds a flaming torch symbolizing the enlightenment that freedom brings.

In her left hand, she holds an olive branch symbolizing peace and victory. Her gaze is assured.

The legend is the main inscription on the coin’s surface and on the American Gold Eagle coin, it reads “LIBERTY” above Lady Liberty’s head.

The mint year is displayed towards the bottom right. From 1986 to 1992 the year is engraved in Roman-numeral dating. Since 1992 the coin bears the date in Arabic (standard) numbers.

All around the edge of the face within the rim of the coin are 50 small stars depicting the states of America including Hawaii and Alaska.

The bullion American Gold Eagles do not contain a mintmark. The Burnished and Proof Eagles bear the “W” mint mark of the West Point Mint on the obverse of the coin. 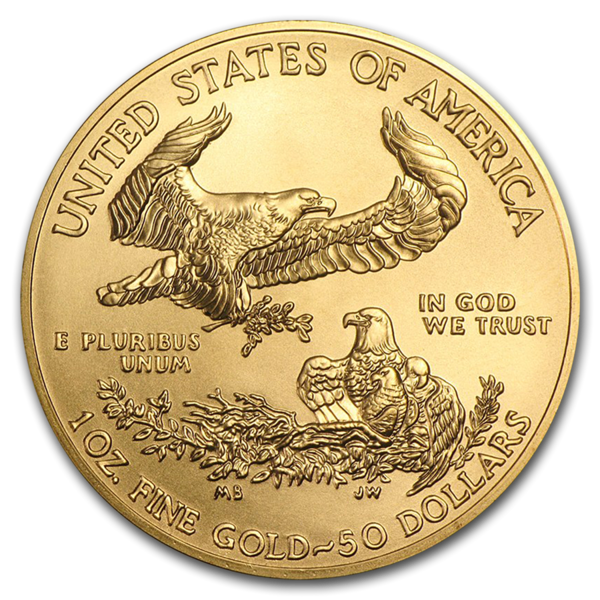 The reverse features a family of Bald Eagles designed by Miley Busiek now Miley Tucker-Frost – jmbullion.com. The Bald Eagle is the national bird of the United States – irishgoldbullion. The design depicts the female eagle sitting in the family nest with her hatchlings safely under her protective wings. A male eagle approaching to land is featured above the nest with an olive branch in its talons. The birds represent the strength and importance of families.

At the top curve engraved “UNITED STATES OF AMERICA”

The motto which is typically inspirational and emotionally stirring is prevalent on the reverse. The words, “E PLURIBUS UNUM” is to the left of the eagles and “IN GOD WE TRUST” to the right of the eagles.

The coin specifications are at the bottom curve with the weight and face value of the coin – “1OZ. FINE GOLD-50 DOLLARS”

The American Gold Eagle coin is a legal tender.

In the US the Gold Eagle coins are legal tender as they are stamped with a government-backed face value. In the case of the 1 oz Gold Eagle the face value is $50. The face value is important although it is not a reflection of the intrinsic value of the coin. The face value as legal tender of the coin ensures that it is classified as money and cannot, therefore, attract tax. This tax “status”  distinguishes the gold coin from other investment classes. It further ensures that the coin can more easily be internationally traded across borders.

Why is the American Eagle regarded as a bullion coin?

Coins that are minted in bulk form are known as bullion. Bullion coins trade with a higher value than bullion bars, because of its aesthetic properties and limited quantity struck each year.

The biggest factor in the value of bullion gold coins is it’s mass and purity rather than its face value. The value of bullion coins can be linked directly to the spot price of gold and its inherent gold content and purity. A premium is added to the gold value for the status of a particular coin in the market.

There is a strong market for collector versions and low mintages which carry a higher premium than pure bullion coins. Obsolete gold coins are primarily collected for their numismatic value – Wikipedia.

The “four” corners of the American Gold Eagles.

The Gold Eagle has been minted in four formats since its inception in 1986.

In my opinion, the American Gold Eagle Coin is one of the most stupendous, breathtaking coins in the world. It is a coin I regularly admire for its esthetic beauty. This coin is not only beautiful but it also gives you various options in finishes as well as different sizes. The smaller Eagles are affordable and make ideal gifts for people of all ages. The Gold Eagle does not only serve as bullion but also attracts collectors. There is an active market for the Gold Eagles all over the world. The American Gold Eagle coin must be considered for inclusion in any gold portfolio.