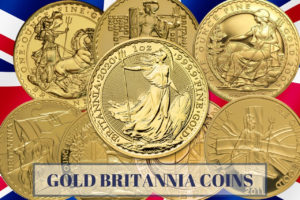 Britannia rules the oceans, but does she rule bullion gold coins as well? The official gold bullion coin of Great Britain is the Britannia Series. The Royal Mint followed in the footsteps of the Krugerrand and the American Gold Eagle by issuing Gold Britannia Coins with a purity of 91.7% gold (22-K gold) in 1987. In the first 2 years, the gold coin was alloyed with copper. Thereafter silver was added as a component resulting in the 22-K bullion Gold Britannia coins until 2012.

From 2013 the gold purity of the Britannia bullion coin was increased to 99.99% pure or 24 karats in an attempt to step up to rivals from the US and Canadian Mints. The Royal Mint expected a global increase in demand for its 24k coin. Especially from the ever-increasing growth in the Far East Gold Markets that prefer 24 karat gold above the 22 karats. The Far East continued increasing their investment in physical gold. A definite shift in gold holding took place from the West to the East.

Britannia is the female personification of Britain. Britannia has been personified as a goddess in ancient times. She is a beautiful young woman, wearing the helmet of a centurion, wrapped in a white garment. The Greek’s were the first to refer to the British Isles as “Pretannia” and its inhabitants as “Britanni” or “Britons”. The Romans followed the Greeks and continued with naming the land “Britannicus” after Claudius who claimed himself the conqueror of Britain. 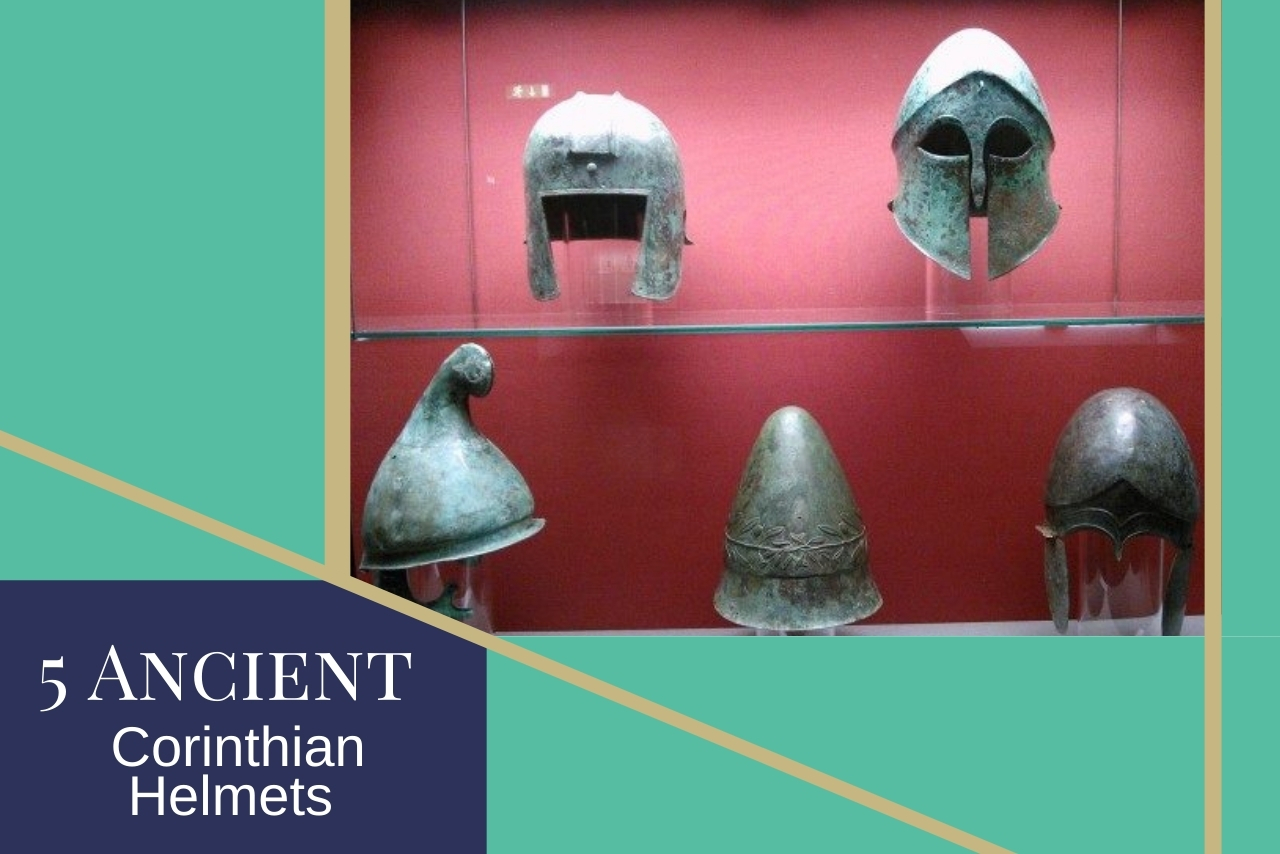 The Britannia figure is actually based on the Greek goddess Athena holding the trident of her uncle Poseiden wearing a Corinthian-style war helmet. The Romans brought Greece’s connection of the female heroine to Britain. Rome identified their furthest region with The Roman Goddess Minerva. Minerva is the goddess of warfare and water. Under the Romans, Minerva soon became Britannia. It was during the reign of Rome in the year A.D. 122 that the female image of Britannia was depicted on coins already.

England being led by Queen Elizabeth became a naval force by defeating the Spanish in the 16th and 17th centuries. The symbol of unity between Scotland, England, Ireland and Wales was the female figure of Britannia.

Under Queen Victoria’s reign, Britain became a world naval power and an empire. British history is packed with triumphant female rulers. A symbolic female Britannia culminates onto British coinage as she is eternalized as a symbol of arts, trade, strategy and wisdom.

As early as 1672 under Charles II Britannia was featured on the coin holding a shield bearing the Union flag.

Britannia with the union shield was introduced by the Royal Mint in 1987. Their first gold bullion coin of modern times featured Lady Britannia on the reverse. Thereafter the design of the Britannia coin remained relatively unchanged except for the occasional unique releases.

The standing Britannia was issued in the years:

For the most part of Britannia’s history, she appeared seated on coins with the exception of 1901 to 1935 on the British Trade Dollars and the florins of Edward VII. When Britannia was introduced to dethrone her old foe Paul Kruger and the Krugerrand in 1987 she started her campaign to rule the coin world in standing position.

The figure of Lady Britannia was designed by sculptor Philip Nathan. This is a striking design and it made the most appearances on the bullion gold coin.

On the coin design, she is featured standing along Britain’s southern coast. Her feet are firmly on bedrock.  She is facing left towards the English channel, maybe looking at her counterpart from the U.S. with the wind blowing her hair in stark resemblance to the standing Liberty Gold Eagle.

In her right hand, she is armed with a trident, symbolic of the British naval power for centuries. The trident three-pronged spear resembles the weapon of Poseidon or Neptune the God of the Sea in classical mythology.

In her left hand, she is holding an olive branch together with the shield bearing the Union Flag to guard the nation. She appears standing as a defender as well as a welcoming figure.

It is interesting to note that Britannia’s deep connection to ancient Greece remains with her wearing the Corinthian war helmet. Historians believe that the helmet originates from one of the largest and most important cities in ancient Greece, Corinth.

Also designed by Philip Nathan, Britannia left her standing position riding a two-horse chariot in 1997 and in 2009.

Britannia with the Lion of 2001

Britannia is standing beside the British Lion. Both are facing to the left moving purposefully forward with a sense of unity. Her dress and helmet are more North European styled. This was the third design by Philip Nathan.

Britannia wearing a helmet of 2003

The fourth design by Philip Nathan reveals Britannia in portrait sculpture. She is facing left and her helmet is pushed back to delineate her beautiful facial features. The portrait is overlaid with a mighty rolling wave within the toothed edged border.

The Seated Britannia of 2005

The fifth design of Philip Nathan presents the seated figure of Britannia facing left. The seated personification of Britannia is reminiscent of the coins of the Roman Emperor Claudius and the British halfpennies and farthings of 1672.

In her left hand, she holds the trident and the union shield resting at her right side. She is described by the Royal Mint as “ever watchful, she sits at the seashore, her helmet and robes harking back to her Roman roots and her trident and shield recalling her great maritime history.”

The Wreath Britannia of 2007

The new designer of the Britannia coin Christopher Le Brun continued the seated figure of Britannia. Le Brun offers a new approach to Britannia however still based upon the tradition of the seated Lady. Similar British symbols are beautifully depicted. However, in his design, she does not wear the traditional helmet with her long hair hanging loose.

The trident is visible in her right hand and resting partly on her right shoulder. In her left hand, she holds an olive branch. She is leaning against a large tree trunk and her union shield is fully visible beside her. The national animal of England, the Lion is resting at her feet.

In the background, the seas, sailing boat, cliffs and probably most prominent a large curving olive branch along the top left curve of the coin. The olive branch is like a wreath resulting in the nickname the Wreath Britannia.

The Lighthouse Britannia of 2008

The 2008 design by John Bergdahl is a fresh return to a minimalist design. Britannia is standing steadfast amidst crashing waves forming along the left curve of the coin. The trident is clasped in her right hand and a full facing union shield in her left. A small lighthouse is visible behind her left shoulder hence the nickname The Lighthouse Britannia.

The Profile Britannia of 2010

This is another head portrait design similar to the 2003 coin. The artist Suzie Zamit designed the 2010 reverse of the Britannia coin. She is widely recognized as an exceptional portrait sculptor, which naturally led to the profile head seizing the majority of the reverse feature.  Britannia is facing to the right. She is wearing a Corinthian helmet pushed back to reveal her face. The helmet is decorated with a lion head motif following the top curve of the coin. She is wearing a tunic that is fastened by a ring brooch on her right shoulder.

The Union Flag Britannia of 2011

In this fully seated picture of Britannia, she is holding the trident in her left hand. She is wearing the Corinthian helmet as protection. In her right hand, she is supporting the shield decorated with the Union Jack cross. 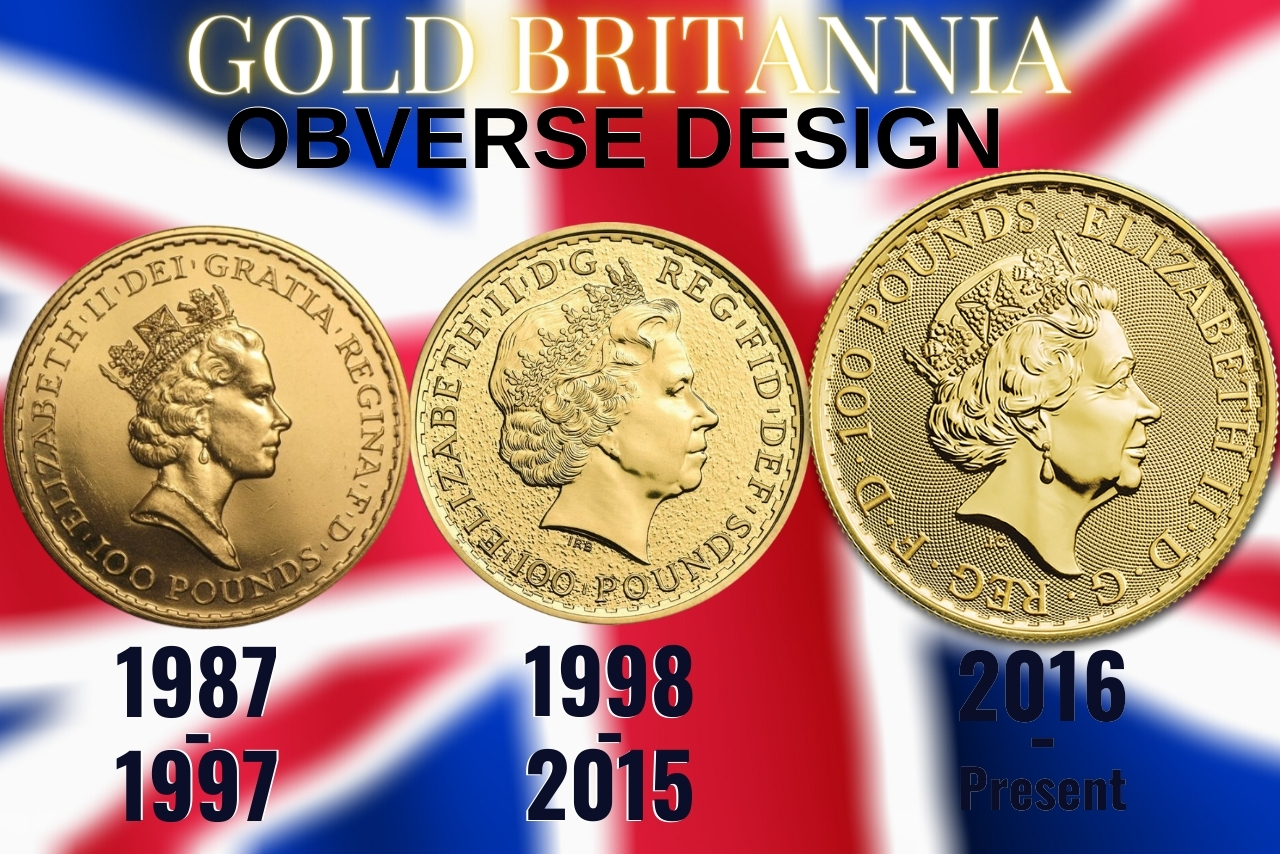 In contrast with the reverse design, the obverse side of the Gold Britannia coins has fewer versions. There are a total of three different designs of the Queen Elizabeth II effigy that are depicted on the coins.

The biggest factor determining the mintage production each year is the market demand and the ability of the Royal Mint to source gold to meet its demand. Other than that, the Britannia Gold Bullion coin is produced in unlimited mintage each year.

Four new security features were introduced in 2020 by the Royal Mint which elevated Britannia coins among the most visually secure coins. The idea behind the security features is to visibly elevate the coin so that it can be authenticated as a genuine Royal Mint product by merely moving it and using the natural reflection of the metal together with advanced technology.

Gold Britannia coins exemplify superior minting. There is no doubt that Britannia coins, gold or silver are among the most beautiful reverse design coins on the planet. These coins are extremely well manufactured and in doing so certainly reminds us of the best of Britain.

The Britannia coin’s design is packed with symbolism that is dear to Brittain. I am a scholar of history and loves ancient history and can appreciate the symbolism with each reverse design change.

When buying a gold Britannia coin I think some research is required about the particular year to ensure that the premium you pay is not based on numismatic principles as opposed to a bullion coin investment. If you are a collector of gold coins and enjoy collecting sets of different years this may be the coin for you.

I will always consider a Gold Britannia coin before I make a purchase decision. My biggest question is which year and at what price?

With the new security features, the Royal Mint established this coin as one of the most difficult to counterfeit. Security features become more and more important as thugs are also entering the growing gold bullion market.

Gold Britannia Coins are undoubtedly a definite consideration for UK citizens because of its capital gains tax exemption.