The Krugerrand highlighted the need for private citizens to take ownership of their own gold bullion. Individuals revealed an appetite for gold. The Krugerrand was dominating the gold market and South Africa was not shy to produce gold from its deep mines. The Krugerrand had a good run from 1967, as the first pure gold bullion coin that has been minted in the world.

Other countries noticed the success of the Krugerrand coin. It was just a matter of time before these countries started to mint their own gold bullion coin. In 1979 Canada entered the gold “bullion race” by issuing the Canadian Maple Leaf gold coin. The Canadian Maple Leaf gold coin was the Krugerrand’s first major rival and the world’s first 24-carat bullion coin. 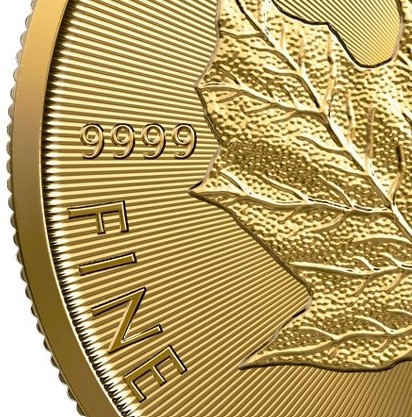 Both the Maple Leaf and the Krugerrand contain one ounce (1oz) of gold. The Royal Canadian Mint distinguished their coin by increasing the purity to 99.9% pure gold compared to the 91.67% gold purity of the Krugerrand. This purer gold content displayed on the coin as 999 was well-received especially by Japan who was the biggest buyers of the Maple Leaf. By 1984 the Maple Leaf held 45% of the Japanese gold market.

Experts argued that the Maple Leaf was softer due to the increased gold content and therefore more prone to damage and wear. Their biggest competitor the Krugerrand contained 8.33% copper alloy.

The Royal Canadian Mint started to produce .9999 pure fine gold Maple Leafs from November 1982. This established the Canadian Maple Leaf gold coin as the purest gold coin in the world. The purity of the Maple leaf was increased even further when the first bullion coin to contain 1 ounce of .99999 fine gold was issued.

The refining process delivering coins of 99.99% (24 carats) purity is backed by a guarantee from the Canadian Government regarding the coin’s weight and purity.

Resistance against the South African government grew in the 1970s and 80s due to their apartheid policies. The Krugerrand’s popularity dwindled as the world skittish away from doing business with South Africa. Many countries instituting an all-out ban of the Krugerrand. By 1984 the stage was set to dethrone the Krugerrand from its stronghold on the gold bullion market. The Maple Leaf had has taken 25 percent of the gold bullion coin market in only 5 years from 1979. To date, more than 39 million gold Maple Leafs have been minted. – Goldbarsworldwide.com. This makes it the second most popular gold bullion coin in the world after the Krugerrand.

The progressiveness of the Maple Leaf gold coin. 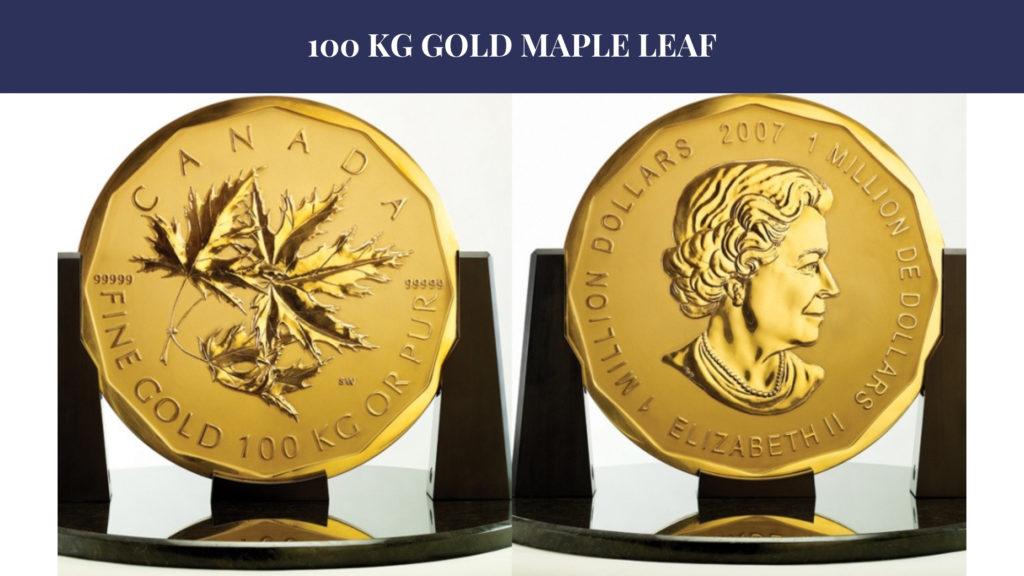 Something that comes to mind when studying the Maple Leaf is the progressiveness of how the Royal Canadian Mint and the coin developed over the years to remain competitive in the gold market.

The most secure coin in the world

The Maple Leaf is a very recognizable coin, presenting the maple leaf which is the national symbol of Canada. The Maple Leaf gold coin blends historical significance with precise details, security and consistency in production. Every aspect of this coin boasts of quality and precision through technology.

The obverse of the Gold Maple Leaf 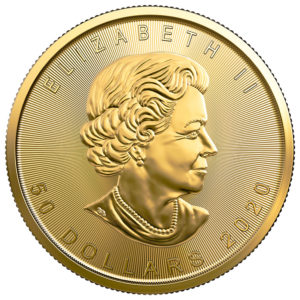 At the top curve the words “ELIZABETH II”.

At the bottom is displayed the face value of the coin $50 CAD and the year it was minted.

The reverse of the Gold Maple Leaf

The maple tree that bears the leaves has become the most prominent Canadian symbol nationally and internationally. The maple tree contributes valuable wood products, sustain the maple industry and help to beautify the landscape of Canada.  It has contributed to the historical, commercial, environmental and aesthetic development of Canada. Since 1965 the maple leaf has been the centerpiece of the National Flag of Canada.

The coins produced by the Royal Canadian Mint are officially known as Maple Leafs since 1979. The reverse of the Canadian Maple Leaf gold coin features the maple leaf symbol of Canada.

At the top arcs the word “Canada”.

A laser mark micro-engraving maple leaf on the coins since 2013. Etched within the center of the maple leaf are two digits indicating the coin’s production year, which is only visible under magnification.

Radial lines that are precisely machined within microns replaced the traditional bullion finish. The lines width and pitch create a light-diffracting patten specific to each coin.

The Maple Leaf gold coin is available in 5 standard sizes:

There are not many cons with owning Maple Leaf coins. The most known cons are:

The Canadian Maple Leaf gold coin is a prestigious coin. The coin that is exclusively produced from gold has little competition in terms of purity, quality and security. Experienced coin bullion investors have found value with investing in a coin that has a history of over 4 decades. The timeless design along with its security features makes the investment in gold bullion very simple for first-time investors. In my opinion, the Canadian Maple Leaf gold coin must be considered when investing in gold bullion.