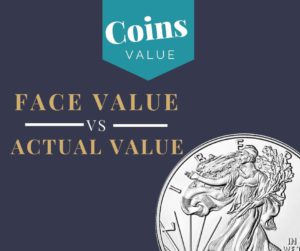 The coin market is complex and different factors need to be considered to determine the value of a coin. The coin market is divergent from the stock market. In the stock market, the most important driving force of the value of shares is profit. In the real estate market, the main driving force of value is location. There is a saying in the property market that 3 things determine the price of property and that is location, location, location. What determines the value of silver and gold coins?

The face value of coins

“The face value is the written, stamped or printed value located on a coin itself and it is the value assigned by the government to determine a coin’s price as a form of legal tender. Coins that do not carry the status of legal tender are called rounds as they do not have any face value stamped on it ” – provident metals.com”

The intrinsic value of a coin is not visible and the value is determined by a combination of qualities of the specific coin.
The first step in determining the value of your coin is to identify them. In this process you will find from which country the coin comes from as well as the date of the coin.

According to Susan Headley from “The Spruce Craft” there is a difference between the price of a coin and the value of a coin. The price of a coin is referred to as the retail price that is listed on a price list and published in books. You will not get the same price when you sell your coin to a dealer and this is where the value of the coin is determined.

The rarity of a coin is very important when considering the value. A scarce coin will sell for considerably more than a more common coin.

It is natural to assume that an older coin would be worth more than a new coin because generally there are fewer older coins available. The age of the coin is not necessarily an indication of its value. Other factors come into play that has a bigger impact on the value of a coin for example its condition.

Certain time periods in history may result in special circumstances that affected how many coins were minted like the Coinage Act of 1873 that put the USA on the gold standard.

In other times like the 1918 Pittman Act, 350 million silver dollars were claimed for their metal and melted down in bullion and shipped to England. This melting significantly reduced the number of coins. The general population may also melt coins for their metal value which happened in 1980 when the silver price surged.

The reduced numbers of coins left, significantly affect the price and value of a coin.

The year that the coin was minted for example 1794 is a significant year because this is the year that the first United States’ dollar was minted. The 1794 Flowing Hair Dollar is well known as the first rare coin to be sold on auction for over $10 million in January 2013. 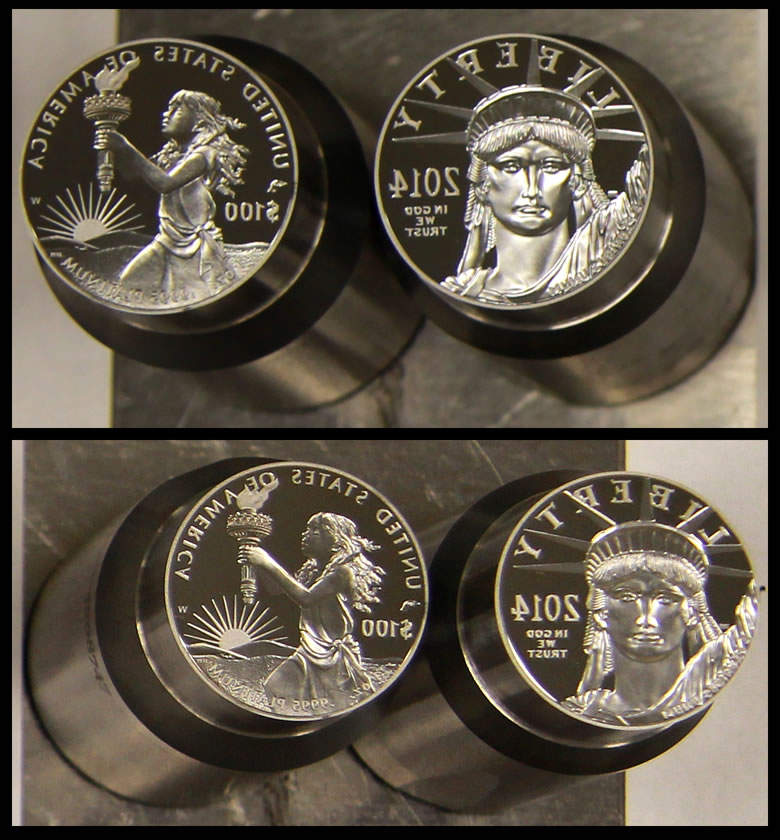 Coinage is the process of manufacturing coins using stamping. The coin die is one of the two metallic pieces that are used to strike a coin, one per each side of the coin – Wikipedia.

The precious metal market is regarded as an alternative to store wealth and to protect oneself from failures in the world’s monetary system. The monetary systems are open to manipulation by governments and banks where currencies can be created without any value associated with it.

The mining of precious metals is a costly affair that utilizes expensive machinery and human labor. The energy used to obtain precious metals like gold and silver give it an associated price and value.

Silver and gold coins contain a guaranteed amount of precious metal. When these coins are melted down it will give the coin its melt value. The melt value is linked to the price of precious metal. By using the year 2000 as a base, the silver spot price has increased by 387%. Since last year silver increased by 61.14%. Given the metal content in your silver coin, the value of your coin increased with at least these percentages.

The precious metal content is given with the Coin Specifications.

The normal coin specifications are:

Uncirculated coins are usually worth more than circulated coins because uncirculated coins have not been issued to the general public for use. Uncirculated can also refer to a special coinage process used by the mint to add a quality enhancement that gives a coin a better finishing look. The proper striking of a coin can highlight the design and result in a sharper, clearer coin image. This is for example achieved with the first stamping strikes by the dies and, special cleaning and protective packaging after stamping.

The damage like scratches, dents, incision, spots incurred by circulated coins negatively affects the grading and hence the value thereof.

The aesthetic features and artistic element is a component of the condition of the coin that does not refer to the damage a coin incurred. The artistic impression refers to the eye appeal and attractiveness of the coin. Beautiful artistic designed coins are more sought after than unattractive coins. Great care and skill are required with coin design. The more attractive the design the more valuable the coin.

An item from a historic event that grasps the imagination of countless people will increase the demand of such an item and hence the price. A good example of this would be the objects salvaged from the Titanic shipwreck. The sinking of the Titanic left an incredible mark on people. The personal items and pieces abroad that were salvaged have an immense value which is driven by sentimental value. Collectors pay a premium price to attain a piece or item of historical value.

Under the same title, you can also find Commemorative Coins which is a special coin to honor an outstanding person, place, or event.

When a large coin horde is put on the market at once, the price will fall as buyers realize that there is a large quantity on sale. Similarly, the price of a coin can be influenced by the coin stock that a dealer has on hand. A dealer will more likely sell items at a discount price if he has too many of those items on hand. Coin dealers will also tend to pay less for an item that they have a large quantity of stock on hand. It is advisable to get more than one quote from different dealers before selling your coins to a dealer.

A contributing factor to the increase in the value of silver and gold coins is due to the fact that gold and silver are regarded as safe money because it is limited in supply. In the current time period of fiat currency creation, it is more important than ever to get involved in the precious metal market. You don’t need to feel intimidated by the complexities of the numismatic market. The mere precious metal content that you can get your hands on in the form of a coin can protect you against manipulation, inflation and uncertainty of other asset classes.