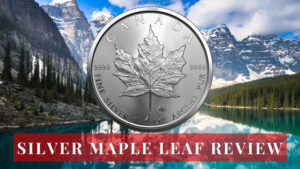 Silver as money has a rich history that even surpasses gold. Private citizens are returning back to their roots in the rediscovery of solutions to protect the free man and the free market. In this quest, the Silver Maple Leaf Coin has risen as a true vehicle to carry the name of silver for ordinary people to invest or to collect. The coin trades at values linked to the spot price of silver which is much higher than its marked face value of only 5 Canadian dollars.

Let’s first look at the specifications of the 1 oz Silver Maple Leaf bullion coin to help you identify the real deal, shall we?

The obverse design features the effigy of Queen Elizabeth II, heralded as the Queen of Canada. There are three subsequent designs of the Queen’s profile depicting her at a different age.

Susanna Blunt’s portrait of the Queen without the crown was first minted in 2004. Her initials “SB” are engraved on the Queen’s right shoulder.

The bottom curve the coin’s face value of “5 Dollars” and the Year of Issue.

The Silver Maple Leaf Coin features the iconic, instantly recognized Canadian maple leaf. The maple leaf is the National symbol of Canada and paraded on its National Flag. The maple leaf appeared on all Canadian coins from 1876-1901. Today the Maple Leaf no longer appears on all the coins.

The inscriptions are:
Along the top curve “CANADA”.
The legend right and left side of the leaf “9999”.
Bottom curve: “FINE SILVER 1 OZ ARGENT PUR”.

One word that comes to mind when looking at the reverse design is stability. That is due to the fact that the reverse design remained relatively unchanged since its inception in 1988. I use the word “relatively” because various security features were added to the design over its lifespan changing slightly the features of the reverse side of the coin.

The bigger the silver bullion that you buy, the bigger is the risk of buying fake silver. One ounce silver coins are the most difficult to counterfeit when buying silver bullion. The RCM is the leading mint in the world with security features against counterfeiting.

Their flagship product the 1-ounce 99.99% pure silver Maple Leaf bullion coin is being continuously enhanced with world-class features over its proud history.

Radial lines that emanate from the center of the coin replaced the traditional smooth finish. The radial lines create a light diffracting pattern giving a distinguished look to the coin. The lines that are precisely micron engraved are extremely difficult and costly to counterfeit.

The micro-engraved maple leaf is the unique enhanced security mark of the RCM. The maple leaf is engraved by laser technology. There is a number engraved inside of the micro leaf which is more easily visible with a magnifying glass. The number is for the year the coin was issued.

Every Silver Maple Leaf coin produced from 2015 onwards contains a digital non-destructive activation (DNA) technology. Each coin is encrypted with images and codes which are stored in the RCM database. Bullion dealers can verify the authenticity of registered Silver Maple Leaf coins within seconds.

The MintShield is a unique manufacturing process developed by the RCM after years of research to reduce white spots also called milk spots that appear on the surface of pure silver bullion coins. The Silver Maple Leafs bullion coins dated 2018 and later are protected with MintShield, significantly reducing the occurrence of white spots.

RCM issued a number of special releases of the Silver Maple Leaf coins which are categorized in 5 categories by Wikiwand:

The Pros of the Silver Maple Leaf Coin

Lets look at the many Pros of buying and owning a Silver Maple Leaf coin.

The Silver maple Leaf coin’s purity is its strongest selling point. Who would thought back in 1988 that a silver coin with 99.99% purity would be such a success? The Royal Canadian Mint identified this section of the market and satisfied the need for extremely fine coins.

The Royal Canadian Mint is at the forefront of technical perfection in its production process. The Silver Maple Leaf coins are subjected to strict quality standards before being released to the public. When you buy this coin you buy a quality silver product.

It is the second most recognizable coin in the world after the American Silver Eagle. Many people love the design and praise the Maple’s 3D appearance. It is easier to sell an identifiable coin irrespective of where you are in the world.

Even though the coin’s purity is higher than the Silver Eagle coin, it sells at slightly lower premiums above the silver spot price than its main rival. For a silver investor who is buying bulk quantities, this is an important advantage.

The Royal Canadian Mint keeps the design unchanged in a similar fashion as the Krugerrand which provides stability to the silver coin. Even people that do not own a Silver Maple Leaf coin can recognize the design.

The coin trades at low premiums above the silver spot price which makes it one of the most affordable ways to invest in silver bullion.

At its low prices, the Silver Maple Leaf can quickly be turned into cash. Functioning in an active market, it is said that they are even more liquid than gold. Since the Silver Maple Leaf contains 1 – ounce silver it trades at smaller fractions that can easier be sold than large silver bars. You also have the ability to sell fractions of your collection in case of an emergency.

They are easily portable as these coins are sold individually, packed in plastic tubes of 25 or monster boxes of 500.

Silver is known for its ability to preserve its value over time.

10. Guaranteed by Government of Canada

As a legal tender with a face value of $5 CAD the 1 ounce Silver Maple Leaf coin is backed by the Government of Canada and sold without VAT charges. The coins sell at much higher values than their face value depending on the spot price of silver.

All Silver Maple Leaf coins are eligible to be placed inside a self-directed Independent Retirement Account.

Last but not least. What makes this coin famous is its many security features that effectively combat counterfeiting. These security features give an investor or collector unparalleled peace of mind when investing in the Silver Maple Leaf coin.

The Cons of the Silver Maple Leaf Coin

There are not many downsizes to the coin but lets look at the most known cons of the Silver Maple Leaf coin.

The problem of the unsightly milky-like appearance on the coins is well documented. If the contamination was caused by the manufacturing process it is irreversible.

These milk spots have no negative effect on the silver value of the coin but it severely affects its numismatic value. The Royal Canadian Mint put vast resources in research and development to combat the appearance of this contamination. All their work resulted in their famous Mintshield protection against contamination that is prevalent in coins issued after 2018.

The milk spot occurrence is not unique to the Silver Maple Leaf coins. It appears in a number of coins including the Silver Eagle and the Krugerrand silver coin.

It is more difficult to sell coins with milk spots and the price drops significantly when selling. On the upswing, you will pay a lower premium when buying these coins, which can be a good strategy when investing in the silver metal value only.

This is something I was not familiar with before I started my research. Many people actually do not like the obverse effigy of the Queen. It became also clear that people do not want to support the Queen and they feel that they support the British Monarch if they buy the coin.

Some people also believe that the Queen depicted without her crown from 2004 onwards remove the classy look of previous coins where she wears the crown.

3. Fluctuations of the silver market

The silver market is a tiny market in comparison to the gold market and the stock exchange. Any large sale or purchase of silver contracts can affect this market severely resulting in fluctuations. The Silver Maple Leaf coin’s price is directly linked to the spot price of silver. The coin’s prices fluctuate with the rise and fall of the silver spot price which can be daunting for investors.

In the Silver Maple Leaf Coin review, the reader is guided through the important aspects of this silver bullion coin. Much more could be said about this state-of-the-art coin, especially about all the special releases of the coin throughout its history.

It is regarded by many as the best silver bullion coin. What comes to mind to make such a monumental claim is the Silver Maple Leaf coin’s:

In my opinion, the Silver Maple Leaf coin is truly a masterpiece, manufactured by one of the best mints in the world and a definite candidate for consideration when buying silver. My word of caution is to be careful of those milk spots.