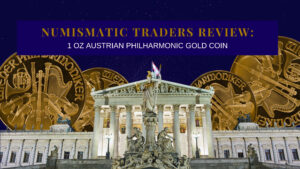 Welcome to Numismatic Traders! We review the 1 oz Austrian Philharmonic Gold Coin also known as Vienna Philarmonic or simply “Philarmonic”. The 1 oz Philharmonic Gold Coin is regarded by many as the most reliable bullion coin in the world. Its reliability is depicted by the fact that this coin’s design has remained exactly the same (except for the year of issue) since its introduction in 1989.

When, in 1194, Richard the Lionheart paid 12 tonnes of silver to Duke Leopold V of Austria not only did he secure his freedom from a year of incarceration, he also unwittingly laid the foundations of the Austrian Mint. ~ From Austrian Mint official website

As the brief excerpt above implies, the Austrian Mint boasts a long, and compelling history of striking coins, but only in the mid 19th century was its feet planted in the center of Vienna, in Heumarkt, where it currently resides. Much credit is awarded to this tiny nation of exquisite art and brilliant minds, but among the most prominent vessels for the talent she fosters is the Austrian Mint. And of all the coins struck there the 1 ounce Vienna Philharmonic is the Magnus Opus.

In 1990 only one year after its introduction, it was the best selling gold coin in Europe and second-best worldwide. Then in 1992, it doubled up on its acclaim with being the bestselling gold coin across the globe. Showing that it was not mere luck, this feat was accomplished again in 1995, 1996, and 2000 – World Gold Council.

From the year 1989 up to 2012 over 14 million of the coin has been sold, which amounts to a weight of nearly 329 tons in Gold. In 2004, the Vienna Philharmonic accounted for 35 to 40% of sales in Europe and enjoys worldwide sales in places like Japan and North America.

Let’s jump into the technical specifications of this classic bullion coin.

Vienna is famously known as the city of music and was at one point or another home to some of the biggest names in musical history. The delicate lines pressed into this precious metal shape the bodies of those most beloved instruments of the Musikverein’s Golden Hall. 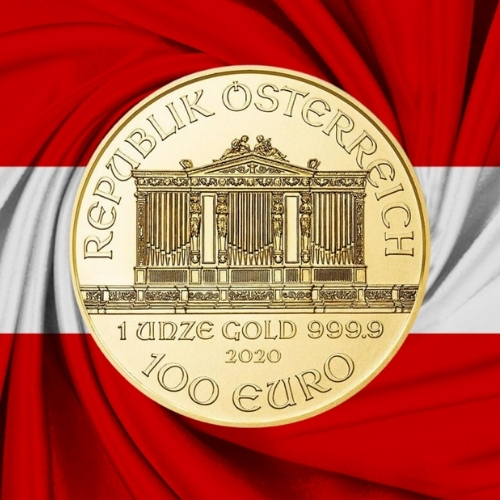 At the top the words “Republik Osterreich” arch over a grand pipe organ centered in the middle of the coin.

Taking the front of Theophil Hansen’s Großer Musikvereinssaal the Musikverein pipe organ beams with a regality so very telling of the proud nation that birthed it. As much of the inspiration for the cultural boom that ensued during the renaissance can be attributed to the reminiscence of antiquity it seems fitting that the instrument should be adorned with Hellenistic features, complimenting the rich history of its music.

This style can be seen on the famed organ casing modeled on the obverse, with the organ itself being the fourth installment the building has seen since 1870.

The organ first built by Friedrich Ladegast gathered a number of technical complications in the end due to over-modification.
The second survived the blast of a grenade during the final chapters of WW2 in 1945, and was subsequently repaired in 1948, only to later be replaced by something more sophisticated, and electronic.

After the death of its master, German conductor Karl Richter in 1981, the third installment was judged to be ill-suited for its role as an orchestral instrument. Finally, near the end of the 20th century, the present-day Musikverein Pipe Organ with its 6,138 pipes and 81 stops was constructed, and on 26 March 2011 was blessed by Cardinal Christoph, the archbishop of Vienna.

In a line directly below the Musikverein Pipe Organ appears the words “1 UNZE GOLD 999.9” the year of issue is inscribed directly underneath the line. Concaved in a semi-circle at the bottom “100 EURO” completes the obverse of the Philarmonic gold coin. 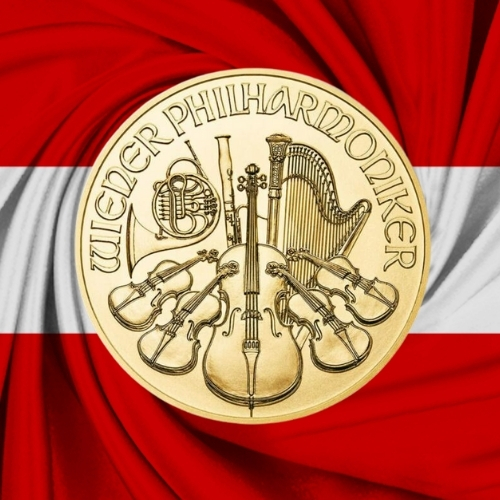 On the reverse is displayed an array of music instruments often associated with the Philharmonic arched by the words: “Wiener Philharmoniker”

Looking and describing the instruments from left to right:

Modifications to the natural horn made handling the imposing mass of brass tubing smoother and added versatility. And so with the addition of piston valves, the widening of the tube, an enlarged bell, and a number of other changes the Vienna horn made its way to the 19th-century auditorium.

A woodwind instrument with two distinguished systems at hand, the Buffet from France, and the Heckel from Germany. It consists of two bores that can be made out of reeds or mapple, or synthetic materials such as ebonite, or polypropylene. The German reeds having spines that are thicker down the center, while the French reeds are beveled. Bassoons also entered the stage in the 19th century.

The Violin, and Viola

Few instruments can boast the esteem with which the violin has swerved the course of music. The viola is the violins baritone cousin, with a slight increment in size, and thicker strings. From the years of its creation in the 16th century in Northern Italy, and into the modern age its four strings have made legends out of studious devotees, bringing to mind names such as Mozart, Vivaldi, Bach and Pagannini just to name a few.

Sharing most of its history and shape with that of the violin and viola the cello requires but a few words to distinguish it from the rest of its peers. It often featured five strings, and mostly reinforced the bass line in ensembles. It rose to prominence in the 17th, and early 18th century, but its size was only standardized in the mid 18th century. With a back length of up to 760mm (30 inches) and neck of 280mm (11 inches) it has proportionally deeper ribs and a shorter neck than the violin. Longer strings with more mass means the cello produces a more reverberant, deep sound when plucked.

Perhaps the most ancient, and regal instrument of them all, the harp played in throne rooms from the days of the early Mesopotamians. In multiple cultural depictions from around the world, it appears with an almost holy undertone. Arpeggio is the act of plucking each string individually, while sweeping the hand across the strings is known as glissando. The type of harp expressed on this coin is called a pedal harp, which is a more modern invention possessing as a standard 47 strings, and 7 pedals.

The product range of the Austrian Philharmonic Gold Coin

For those individuals on a budget, the Austrian Mint produces four smaller additions to the 1 oz bullion coin. These smaller depictions of this famous one ounce gold coin are also popular for collecting as a set.

Pros of the Philharmonic

Cons of the Philharmonic

It is difficult to find any negatives specifically associated with the 1 oz Austrian Philharmonic Gold Coin.

Only a few gold bullion coins can match the Austrian Philharmonic Gold Coin. The coin originates from a Mint with a rich heritage of over 800 years. The Austrian Mint is known for producing some of the finest coins in the world. Its trading knows no borders as it still soars across the international market, recently gaining the interest of the economic giant that is China. Therefore when you buy a Philharmonic gold coin you get gold, packed with reliability, good performance in the market, high purity and charming good looks. Given its reputation for stability, I’d say this gold bullion coin is a serious consideration when you are looking at buying gold. If you are a European Citizen the Philharmonic gold coin should be on top of your list of coins to own.