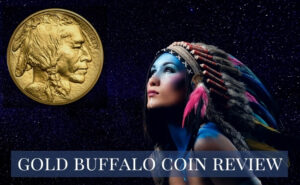 Today we are reviewing the first 1 oz .9999 fine gold coin produced by the US Mint and currently the purest gold coin offered by the US Mint. The hunger for 24-karat bullion gold did not escape the attention of the US Mint following the success of the Canadian Maple Leaf Gold Coin. It took them some time to introduce the Gold Buffalo Coin in 2006, well after the success of the less pure 22-karat American Gold Eagle Coins.

Background of the Gold Buffalo Coin

The coin inherits its name from the American Bison that are depicted on the reverse side of the coin. The coin’s striking similarities to the 1913 Buffalo Nickel on which the design is based, resulted in the name “Gold Buffalo” that stuck as a popular name for this American Gold bullion coin.

The Gold Buffalo was officially approved for coinage under Section 201 of the Presidential $1 Coin Act in December 2005.

The Act specifically states that: “The gold bullion coin struck under this subsection during the first year of issuance, shall bear the original design by James Earle Fraser which appear on the 5-cent coin commonly referred to as the ‘Buffalo nickel’ or the ‘1913 Type 1’”

The mintage of the coin was set at quantities below 300,000. The gold buffalo was an immediate success among the American public. It meant that the US citizens could buy and own 24-karat pure gold coins from their own Mint rather than turning to overseas supplies of the Chinese Panda or the Canadian Gold Maple Leaf.

According to the Presidential Act, only newly mined gold from the United States are allowed to be used for the gold content of the coin.

Suspending sales of the Gold Buffalo in 2008

At the beginning of  2008, the US Mint kept the price of Gold Buffalo Coins at high premiums above the gold spot price for the first part of the year. This resulted in low mintage following the low demand for these high priced coins.

The Mint adjusted the price downwards late in 2008 which was suddenly marked with economic turmoil and financial uncertainty. Investors flocked to the safe haven of gold bullion. The demand far exceeded the supply resulting in gold stock outages at the US Mint, forcing the US government to temporarily suspend the sales of Gold Buffalo 1 oz bullion coins.

Features of the Gold Buffalo

The Gold Buffalo Coin’s design was written in the law stated above. The design has remained unchanged since its inception. It is based on the original 1913, 5-cent design of James Earle Fraser. Fraser was clearly the right person for the job because of his love for, knowledge and history of the Native American people. Fraser’s most famous work is a sculpture of a Native American atop a horse entitled “End of Trail”.

Obverse of the Gold Buffalo Coin

The prominent head figure of a Native American man dominates the obverse side of the coin. The head figure appears noble with his elegant features facing to the right. It is believed that Fraser studied life models of three Indian Chiefs as inspiration to create this beautiful proud image.

The word “LIBERTY” is placed appropriately along the upper right edge following the coin’s curve.

The year minted is written at the bottom left with the initial “F” right underneath for Fraser.

The coin’s obverse is a striking design revealing prominence of the cultural background and history of America.

Reverse of the Gold Buffalo Coin

The reverse is marked by the unmistakable feature of a standing American Bison. This rural image referred to as a “Buffalo” fills the face of the coin.

At the top curve the words “UNITED STATES OF AMERICA”. Directly below the American Motto

In the lower half below the bison’s head, the words “IN GOD WE TRUST”. Below his feet on the piece reserved to feature the ground, the face value of the coin “$50”

Knowledge of the specifications of a gold coin assists you to spot counterfeiting. This is your first line of defense against buying counterfeit products. The standard specification of the Gold Buffalo:

How many Gold Buffalos were issued each year?

The Gold Buffalo seized the attention of the public and was sought-after from day one. Low quantities of the 1 oz Gold Buffalo was minted.

The graph below depicts the Gold Buffalo issued by the US Mint each year.

For people on a low shoestring budget, I have some bad news regarding the smaller dimensions (fractions) of the Gold Buffalo. Initially only 1 oz Gold Buffalos were issued. However, in 2008 the US Mint struck the:

These were sold individually.

In 2009 these fractions were also struck by the Mint but only sold as a Four-Coin set.

That is it! Those were the only fractional sizes issued by the Mint. Naturally these are rare and difficult to find.

The Gold Buffalo Coin trades at values well over the face value of the coin. Within its first year of issue, it traded at $800 per coin. Proof sets have traded in the past at values above $2,000 per coin.

Buyers of the Gold Buffalo are likely to pay an added premium above the gold spot price for the manufacturing process involved in minting the coin, low mintage quantities and the high-grade gold purity guaranteed by the US Mint.

Pros and Cons of the Gold Buffalo Coin

As with any product that you buy online, this gold bullion coin comes with its pros and cons. I will now list each of them below which is in my opinion important for consideration before purchasing this coin.

Pros of the Gold Buffalo Coin

Cons of the Gold Buffalo

I am perplexed by the low quantities being sold each year by the US Mint. I understand it is due to the Mint’s obligations towards other coins as well. The low mintage of the coin may contribute to higher values and prices in the bullion gold coin market.

The US Mint takes great care with producing its 24-karat flagship coin. A buyer of the Gold Buffalo Coin can rest assured that you are obtaining a:

I would definitely consider buying a Gold Buffalo Coin if I find it at a low premium above the gold spot price from an authorised seller.