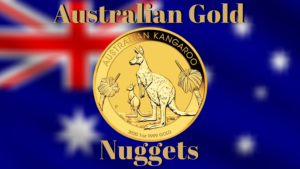 The coin originates its name from gold nuggets which have played a predominant role in Australian gold history. The “Welcome Stranger” nugget found at Moliagul, Victoria in 1869 is the biggest ever gold nugget found. It weighed 78kg (173 lb) and rendered over 2,284 troy ounces of gold net. – Wikipedia

Not so long ago in 1980, the largest gold nugget found using a metal detector was also found in Kingower, Victoria, Australia. The “Hand of Faith” weighed 27.2 kg (60 lb) converting to 875 troy ounces.

Nuggets are naturally formed pieces of native gold. They often appear as rocks that have been polished by water stream action as they are often concentrated by watercourses. The most common method of finding nuggets is with a metal detector. In certain cases, this method does not work when the gold is finely sprinkled and overlaid with bedrock and gravel wash or embedded and enclosed in quartz reef material.

The nuggets found in Australia in general have a higher gold purity than other places on earth. Their gold purity is mostly 23 carat or higher. 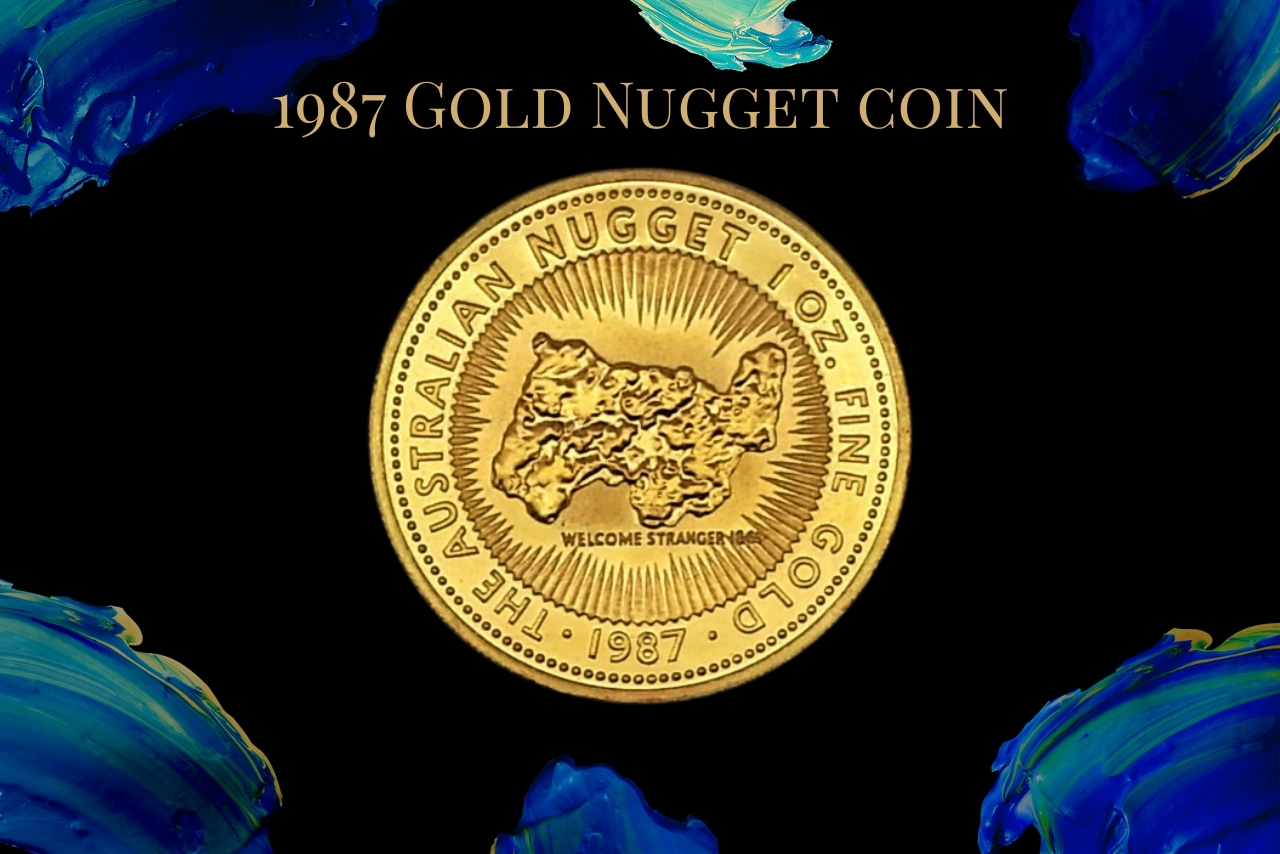 The Perth Mint issued the first four-coin proof sets in 1986 and in 1987 the Australian Gold Nugget was introduced and became Australia’s first gold bullion coin.

The coin derived its unique name from the reverse design that displayed the various celebrated gold nuggets found in Australia.

Each year the Proof sets offered new reverse nugget designs until 1989 when it was replaced by the Kangaroo, believed to be a more symbolic and recognizable representation of Australia.

In 2011 a 1-tonne Australian gold nugget was produced breaking the world record as the biggest coin. The coin measures 31 inches (80 cm) in diameter and nearly 5 inches (12 cm) thick, with a face value of $1,000,000 AUD. This achievement elevated the Perth Mint to one of the most famous and prestigious mints in the world. 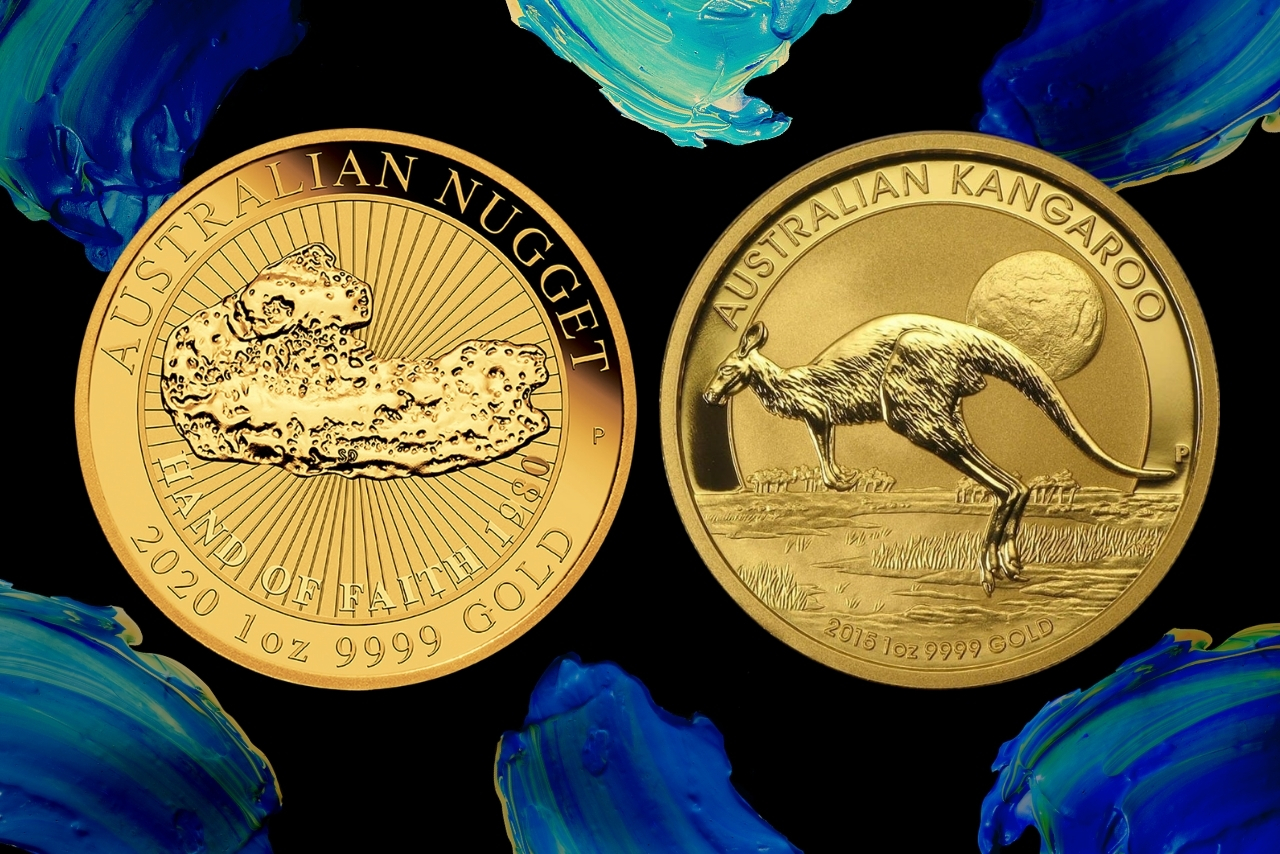 It is not unlikely to be confused about the name of Australia’s bullion gold coin. How I understand it, is that the bullion coin retained its official name as the Australian Gold Nugget stemming from the first 3 years of production. Their nickname is the Australian Gold Kangaroo as depicted on the reverse of the coins since 1989.

The features of the Australian Gold Nuggets

The coin is minted in 99.99% pure gold which places the coin in the same class as the Canadian Gold Maple Leaf coin in terms of purity.

The coin has a frosted, smooth background which is achieved by pressing and striking the coin multiple times. The images on both sides are polished to create a liquid sheen. The contrast between the frosted background and the shining pictures gives the coin its distinctive two-tone effect.

Each coin is issued within a hard-plastic (acrylic) capsule which gives the coin a much needed layer of protection. 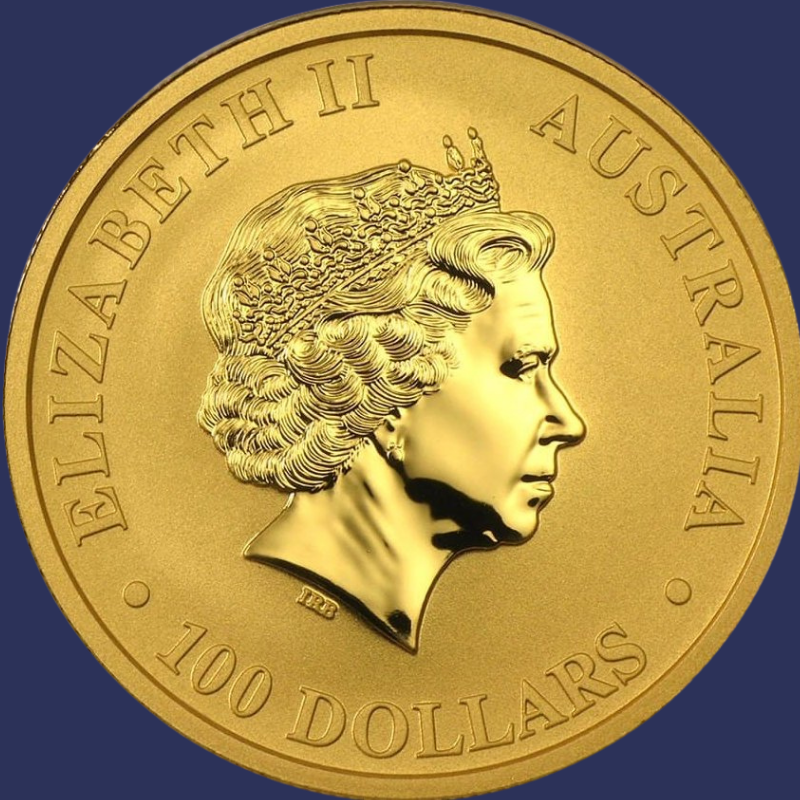 As opposed to the reverse side of the coin the obverse featuring Queen Elizabeth II does not change each year.

The obverse displays the sixth portrait of the Queen to appear on Australian coins since 1952.

The Queen is portrayed from the design by Jody Clerk since 2019 wearing the Royal Diamond Diadem which was worn for The Coronation.

She faces to the right. The design is true-like as every individual facial feature of the Queen is sculptured in perfect likeness.

Written along the left edge “ELIZABETH 11”.

On the right-hand side engraved “AUSTRALIA”.

At the bottom curve the face value or legal tender of the coin with the 1 oz “100 DOLLARS”.

As mentioned before the reverse design of the Australian Gold Nugget is changed every year. Although the design changes a kangaroo animal is always depicted as the main feature of the reverse side. They are referred to as Gold Kangaroos as a result. 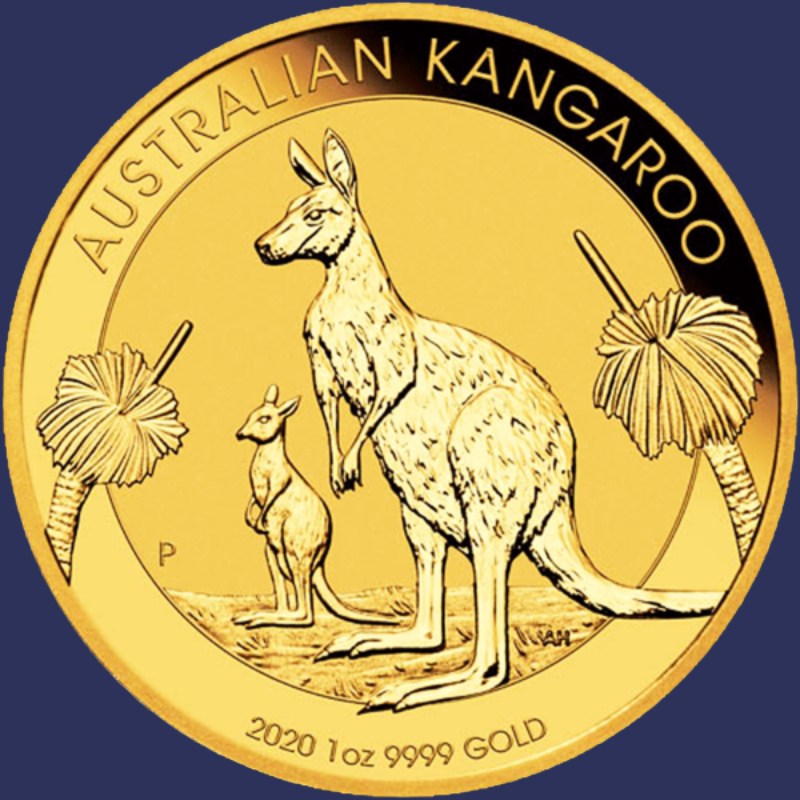 The kangaroo that is indigenous to Australia is also the world’s largest marsupial. The animal is of cultural, spiritual and economical significance for Australia. It is said to symbolize family, power, balance and strength and on an emotional level represent gratitude and abundance. The kangaroo is widely found in Aboriginal Art. As a national image of Australia the fact that the kangaroo cannot walk backward, represents the nation of Australia moving forward with confidence.

The letter P for the Perth Mint is engraved at the foot of one of the trees.

An added security feature with the 2020 bullion coin is the micro laser-engraved letter “A” that is concealed in the reverse and only visible through a magnifying glass.

The Australian Gold Nuggets have the status of legal tender in Australia. The imagery of the Queen on all Australian coins is indicative of the backing by the Australian government. The face value although important for tax purposes is not a true reflection of the intrinsic value of the coins. These coins trade at a premium well over the spot price of gold.

The different ranges of coins have different face values and legal tender amounts:

The Australian Gold Nuggets count as one of the top gold bullion coins. Its outstanding features are its purity, two-tone sheen and its reverse design that is updated each year. These features add to the collectibility of the coin. There is a worldwide active market for Australian Gold Nuggets which makes this bullion coin a definite consideration for collectors and investors.