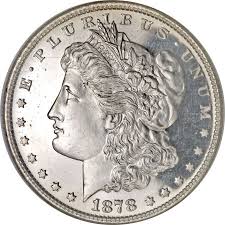 The Morgan Dollar is probably the most known silver coin of the United States of America. The reason for this might be that it was the first standard silver dollar minted after the Coinage Act of 1873. According to Wikipedia, The Coinage Act of 1873 abolished the rights of silver bullion owners to have their metal struck into fully legal tender dollar coins. The main reason for this Act, also informally known as the “Crime of ’73” was to protect the gold standard by preventing the owners of large quantities of silver bullion to struck it as silver dollars and thereby stockpiling it and drive the price of silver down in comparison to gold.

One cannot help to think what this single law has done to the perceived value of silver in comparison to gold. Our perception that silver is less valuable than gold could have been different if the status of gold was not protected by Government Acts like the gold standard. The gold standard according to Michael D. Bordo is a monetary system adopted by a country in which the value of their currency is based on the price and quantity of gold held.

The Morgan Dollar preceded by The Seated Liberty Dollar 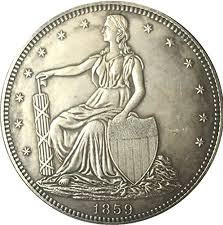 The Morgan silver dollar replaced the Seated Liberty. The coin with its classic design was named after its designer George T. Morgan. The Morgan is a BIG coin with nearly an ounce of silver which is one of the reasons that they are so sought after. The coin comes with a rich history starting from where the silver was mined deep in the mountains to make them. 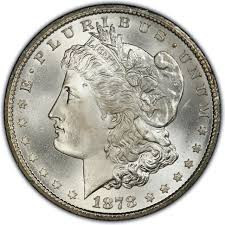 The Morgan was struck at 5 different mints:

By early 1900 the supply of silver bullion ran out. The coins were stockpiled in banks and the US Treasury Department Vaults as the US nation moved to paper-based money which was easier to carry than the heavy silver dollars.

Gold was pulled from circulation by the Allies to pay for the enormous cost of World War 1. The rise in the price of gold led to its hoarding. Britain turned to silver to pay for its wartime efforts for goods from its colony of India. In America under the Pittman’s Act over 270 million Silver Dollars were melted to bullion and sold at one dollar per ounce to England. Just thinking about how many coins were melted is staggering: If the coins were placed next to each other they would cover a distance of over 6,400 miles long. The “silver meltdown” created a shortage of Morgan silver dollars. There was never an account of what numbers of what dates were melted, which resulted in sometimes pleasant or unpleasant surprises in later years. According to numismaticnews.com the silver meltdown reduced the Morgan supplies but did not create many rarities.

According to gainesvillecoins.com no one actually expected the return of the Morgan Dollar after 1904 as the master hubs were destroyed in 1910. But the meltdown of 1918 caught up with the government as the oversupply of bullion resulted in the free-falling of silver prices below $1 an ounce (as low as 53 cents) founding the government to buy silver for much more than its market price. They once again turned to the Chief Engraver of the mint George Morgan. This time he had to provide quick relief by making the maximum amount of coins from new dies from scratch and get them out of the door as soon as possible. The emphasis of the mint was numbers and this resulted in a flat and lifeless coin. The silver dollars were never supposed to be circulated and stored in the Treasury Department vaults to back the paper silver certificates that were circulated.

In November 1921, eight of the nation’s leading sculptors were invited to submit designs for a new silver dollar to

commemorate World Peace after World War 1 and to replace the Morgan Silver Dollar. On 26 December 1921, the first Peace Dollar was struck at the Philadelphia Mint replacing the Morgan Dollar. 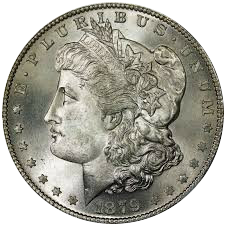 Lady Liberty is wearing a Liberty Cap with the word ‘Liberty” inscribed on a ribbon.

The cap is adorned with two cotton blossoms and two heads of wheat.

A small initial “M” at the base of Liberty’s neck.

The date complete the observe design 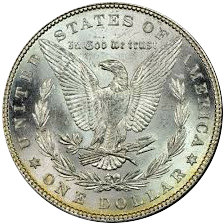 An American eagle with outstretched wings. The eagle holds an olive branch and arrows of war in its talons proclaiming that the peace-loving country will defend its borders.

The motto “In God We Trust” above the eagle with a laurel of wreath surrounding the lower half of the design.

The Mintmark appears below the bow in the wreath.

The initial “M” appears on the left loop of the ribbon tying the wreath. Visible with the help of a magnifying glass.

The Morgan Dollar is one of the most popular and predominantly collected American coins in the world. The reasons they became popular in our opinion are:

Thank you very much for reading.