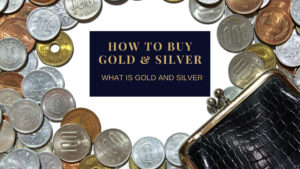 Welcome to Numismatic Traders! In the quest to obtain knowledge about how to buy gold and silver, it is important to understand what is gold and silver.

Most people have encountered gold and silver as expensive artifacts when buying jewelry. Those jewelry items are associated with gifts or declarations of love. Jewelry handed to a loved one or from an admirer. represents scarcity and value.

Currency devaluation is the status quo

It is clear when considering the 98% devaluation of the United States dollar against gold since 1971 that not enough people actually understand and appreciate gold and silver as a means to diversify their investments against currency devaluation.

How many people in South Africa (a country that once produced 75% of the world’s gold) understand the true value of gold vs their currency? How many South African have taken steps to protect themselves and their families’ wealth by buying gold?.

What are physical gold and silver?

Gold and silver belong to Group 11 of the periodic table. Group 11 is also known as the coinage metals. These metals are among the few metals that can be found uncombined in the earth’s crust and as a result the first to be discovered and used by humans – Quora.

For centuries gold and silver have been worn by royalty to parade their wealth and power. These metals have industrial usage because Group 11 metals are excellent conductors of electricity.

The metals in Group 11 have similar physical and chemical properties. This group consists of:

Copper is mostly used for coinage, bullion and in manufacturing of electrical equipment, wirings, construction and industrial machining.

Silver is mainly used for jewelry, coinage and showpieces. It is a shining metal and has the highest reflectivity property of the group and appears mirror-like when polished. Silver is used in expensive electrical applications because it is more expensive than copper. Silver is also being used as an antimicrobial agent in medical applications. Silver is lighter than gold and the second most ductile metal after gold.

Gold has a distinctive yellow color. Gold is mainly used in bullion and coins. It is occasionally used in art, for decorations and ornaments. In manufacturing gold is used in the electroplating process.

Gold and silver in its pure form are very soft and copper is often added to strengthen it. Gold and silver are regarded as precious metals due to their rarity and ability to carry value.

The elements found in the earth’s crust are measured in parts per million (ppm). How do these metals compare in terms of their rarity?

There are roughly 19 times more silver than gold in the earth’s crust. Gold has been more extensively mined than silver as there are more gold above the ground than silver. It is estimated that 9 ounces of silver are currently mined for every 1 ounce of gold.

The Merriam Webster dictionary defines money as “Something generally accepted as a medium of exchange, a measure of value or means of payment.” This is the simplest definition of money.

Most people regard the physical paper notes in their pockets or the digital balances in their bank, loans, or credit card balances as money. Some also consider their investments in the stock market as money. These monetary items are widely accepted across the globe when transacting between parties takes place. They do not store value and therefore lack one characteristic to be defined as money. For this reason, many people would rather refer to these payment mechanisms as Currency or Fiat Money.

Fiat currency vs Gold and Silver as money

The earliest form of money was spices, beads and shells. These currencies fail because they lack durability, have problems to be divisible and lose purchase power over time.

Throughout history, the longest-lasting type of money was gold and silver. Gold is noted as the currency of choice from as early as 600 B.C. According to silverbullion, silver was used more often than gold throughout history. Due to the problem of portability of metals, paper notes were issued, guaranteed by the physical gold or silver.

This led to fiat currency where the government declares fiat money and all the people in the country have to accept it as legal tender. In order to preserve the value of the fiat currency, it had to be backed by a physical commodity.

The worldwide accepted physical commodity was gold. In order to standardize transactions in world trade, governments’ paper currency was backed by gold resulting in the “gold standard”.

The gold standard as a monetary system

The gold standard was a guarantee that the government would redeem any amount of paper money for its value in gold and resulted that transactions no longer had to be done with heavy gold bullion.

During the First World War, the gold standard was suspended to support the war efforts. After the war countries came to the conclusion that there was no need to tie their currency to gold. A modified gold standard was used after the war but finally abandoned by the US in its entirety in 1933 following Brittain.

The Bretton Woods Agreement of July 1944 was reached to create an efficient foreign exchange system and led to the creation of the International Monetary Fund and the World Bank. Countries’ currencies were set in terms of gold. The United States held the majority of the world’s gold and as a result most countries simply fixed the value of their currency to the dollar instead of gold.

As the American economy prospered from 1944 more Americans bought imported goods and paid in dollars. The large deficit in spending by America raised concerns that the U.S. gold supply was no longer adequate to cover the number of dollars in circulation. On August 15, 1971, President Richard Nixon suspended the gold standard based monetary system.

Under the new system after abolishing the gold standard, countries could choose their currency exchange arrangements by linking it to another currency or a basket of currencies or simply allow market forces to determine the value of their currency by letting it float freely against other countries’ currencies.

What is Paper Gold?

Paper Gold and Paper Silver are similar. Paper Gold is considered an asset that reflects the price of gold but is not the physical gold itself. It is a piece of paper that is not backed by gold.

Paper Gold gives an investor the ability to get exposure to the price of gold without physical possession. Investors turn to Paper Gold for speculation purposes and to avoid storage costs associated with physical gold.  You also need less capital to invest in Paper Gold as it can be traded in margins which means that you do not need to pay the full price of the gold and silver that you are trading with.

Examples of Paper Gold are:

Physical investment in gold and silver

Paper Gold is not backed by the actual gold itself which means that you cannot redeem them for physical gold. When you want to sell your “Paper Gold” you will have to find another investor who is willing to buy the piece of paper from you. An investor in Paper Gold is exposed to counterparty risk which is the risk that your transactional partner will fail to fulfill their promise. In times of a crisis or a crash, this can happen and leave you exposed to lose everything.

Some people prefer to buy physical gold because of the risk associated with Paper Gold. These risks are different for each type of Paper Gold.

Types of physical gold and silver as investments

Bullion is defined by dictionary.com as physical gold and silver which is considered in mass rather than in value. Bullion is transformed into ingots, bars, coins and rounds. 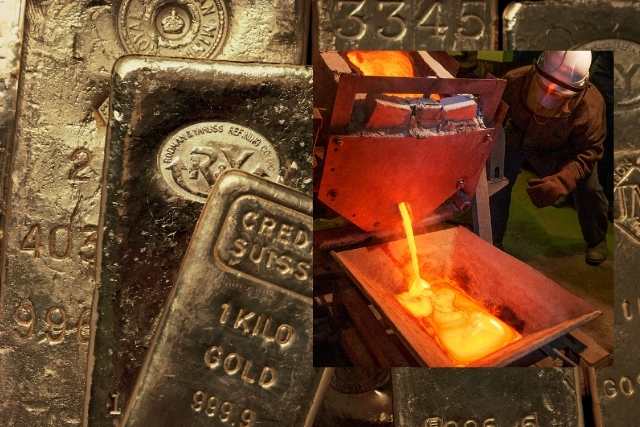 Casted bars are fabricated when the metal is heated and then poured as a liquid form into a mold. The mold is designed to contain a specified weight and shape. The metal solidifies and is taken out of the mold after it has cooled off. Casted bars appear rough and each one is unique.

Minted bars require more artistry and intricate designs. Mint bars follow a similar production process as coins. Bars are created that are of a certain width, thickness before it is stuck, polished and cleaned.

Rounds do not carry a government face value and cannot be classified as legal tender. It looks similar to a coin and is worth their weight in metal. Rounds are produced by government or private mints that have no connection to the government or official mint.

Medals can contain various metals and are struck to commemorate a person or event. Medals with significant historic significance carry high historical value and can be expensive.

Merriam Webster defines a token as

Precious metals tokens are produced to represent, celebrate or advertise something. 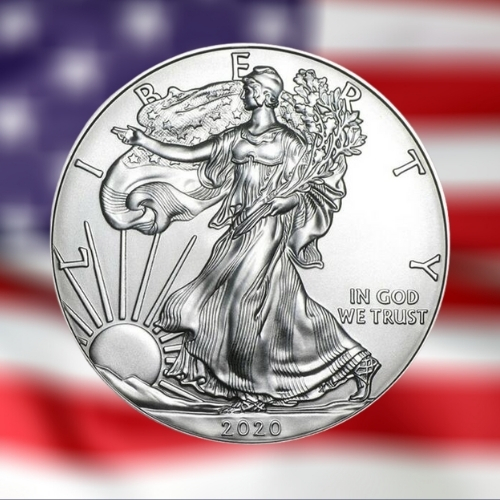 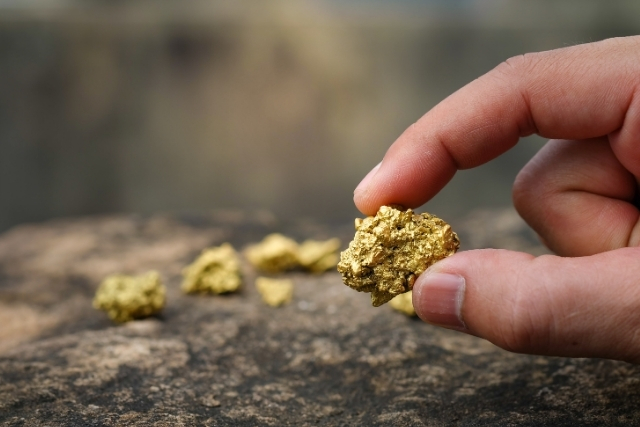 People buy natural gold and silver nuggets for various reasons. Nuggets are irregularly shaped bits of pieces of metal found in the crust near the surface of the ground or by panning in streams. 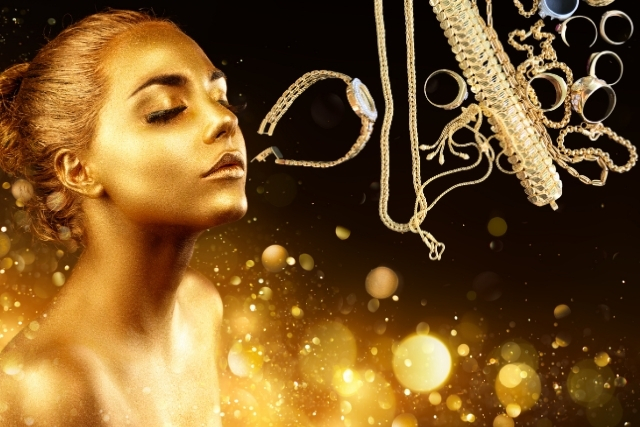 Jewelry is a beautiful piece of art that is painstakingly manufactured which requires a certain degree of skill. Jewelry is long-lasting like the natural resources it is made from. It can withstand heat, cold, fire and water.

Pure gold is soft. Other metals are added to gold to make it harder, brighter, or to change its color.

In my opinion, it is important to have a basic knowledge of precious metals if you want to know how to buy gold and silver.

Gold and silver are money as displayed on many bullion coins with the legal tender impressed on them. Balances in the bank, credit cards and bonds are fiat currency and not backed by anything of value.

Taking ownership of your own gold and silver can be a rewarding and interesting journey. This journey becomes even more pleasant when the value of your gold and silver rises over time.