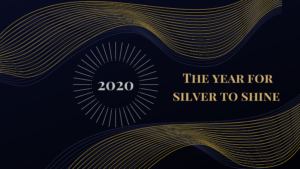 The events of the year 2020 mark the year as one of the most dramatic, monumental years in human history. In the year 2020, many records have been broken and turning points reached. Unfortunately, most of the milestones reached were for all the wrong reasons. There are exceptions among the abysmal events of 2020. The precious metals as an asset class have risen again and made everybody pay attention to it. Will 2021 be the year for silver to shine brighter than ever?

Silver has been viewed as too risky

Silver is marked as riskier than other commodities because of its unpredictable nature – Stephanie Faris of finance zacks.com. For many years the silver market has been regarded as very volatile and the reason for many to shy away from it.

In the period 2010 to April 2013 the silver price growth was above that of gold.

During economic slumps, base metals like copper, and zinc freefall because of the diminished demand by industry. Contrary, the price of silver and gold soars. 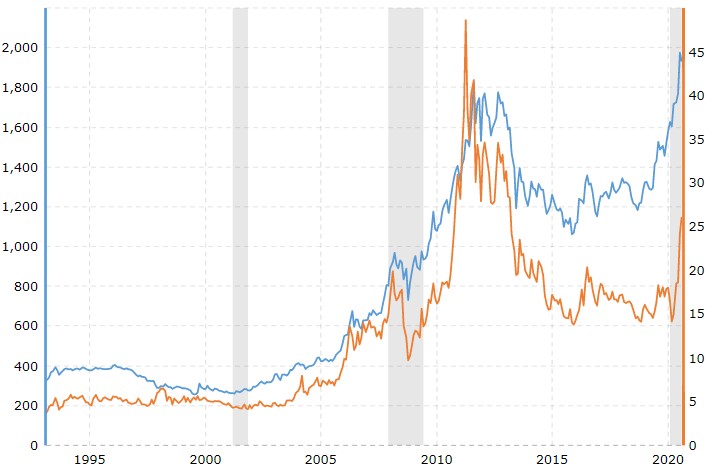 You can protect yourself against the risk of volatility in the silver market by never looking at the silver price in isolation. As a minimum always compare the gold/silver ratio and let gold lead the way. 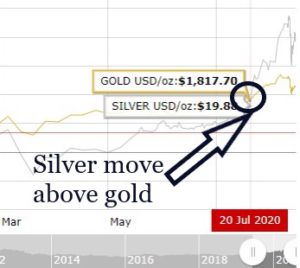 In the week of 20 July 2010, the silver price moved above the price of gold in the gold/silver ratio. Silver was bullish from there onwards and above gold, reaching the highest point of $48.70/oz in April 2013. Thereafter the silver price has never recovered to the level of April 2013 again and fell back below gold to reach a record low of $12.59 /oz in March 2020.

During a cycle where silver moves above gold, you must ask yourself what is the reason for this happening? There is a certain point in the gold/silver ratio where it is too risky to buy more silver and it’s time to load it off.

Now that we have established that there is an indistinguishable link between gold and silver, we have to look at what is happening with markets outside of the precious metal market. The interactive chart from macrotrends.com is very informative and easy to use. Head over to macrotrends.com to get the latest information.

The dow to Silver ratio is a number that tells you how many ounces of silver it will take to buy the Dow on any given month.

World crises, Central Banks and the US dollar 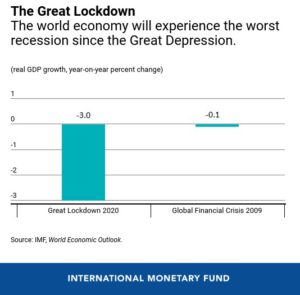 According to the International Monetary Fund, the cumulative output loss over the 2020 pandemic could be around 9 trillion dollars. This will result in the worst recession since the Great Depression and a global shrinkage of 3% in GDP year-on-year percent change. The world’s economies have truly entered unprecedented terrain. Whilst the governments have shut down economies, these governments are required to provide unemployment insurance, bailouts and tax relief. Before the crisis started most of the governments’ spending was already out of control.

The central banks have chipped in their part by providing liquidity and increased fiat currencies at very low-interest rates or no interest at all. Fiat currency is not real money and the global monetary system is on shaky grounds as a result of currency creation. There are signs everywhere that the stimulus packages do not have the desired effects on economic recovery.

The US dollar and precious metals have an inverse relationship. Gold and silver are priced in US dollars. Due to the fact that gold and silver stores value the devaluation of currencies due to inflation result in an increase in silver prices.

There are exciting times ahead for silver due to a combination of factors that work in favor of a silver bull market.

Government bonds offer extremely low returns. Where relative good returns are offered like in South Africa there are uncomfortable risk factors to consider like political instability and corruption.

The risk in the stock market is enormous in this state of depression. Most businesses cannot operate normally resulting in weak financial performances by businesses. The large investors are now turning to gold and silver to be included in their portfolios. It would be financial suicide to ignore the safe-haven assets in the current economic conditions.

The global real estate market faces enormous challenges. The first concern is commercial properties that struggle as businesses are closing down due to the crises. The inability of households to service debts can have a catalytic effect. The global house market has been sustained by the stimulus packages. According to Standard & Poor American homes are now 15% pricier than what they were at their peak in 2007. This is just before the financial crises and crash of the subprime mortgage-backed security market. The outlook for the real estate market is uncertain and there are clear indications that the global real estate market is in a bubble.

The Economist – “On a national basis our valuation metrics point to some cause for concern. In Canada, Australia and New Zealand house prices are about 40% overvalued, compared with their long-run relationship with income. In Britain prices are 40% overvalued compared with rents, but look better-valued against income, which suggests that either rent need to fall or prices need to moderate.”

There is clear evidence that the recent 7-year highs of silver is not only a silver lining but 2021 may be the year for silver to shine. With the pullback in the price of silver, it is not too late to get a slice of the silver pie.